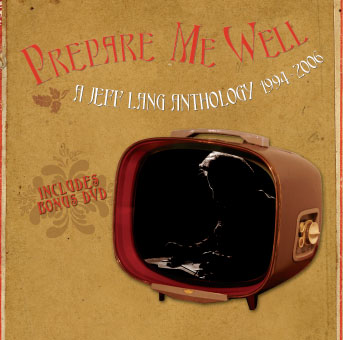 Live archival clips of:
Gina
Is She Slipping
Prepare Me Well
Molasses and Stone
Throw It All
Between The Dirt and Sky
Rain On Troy
Big Feeling
Cutthroat
London

Prepare Me Well – An Introduction to Jeff Lang (US & Europe)

Track listing
The Save
The Road Is Not Your Only Friend
London
Molasses and Stone
Whatever Makes You Happy
Too Easy To Kill
Mr. God
And All The Snow Melted
Bateman’s Bay
Gina
Ravenswood
Cedar Grove
Everything Is Still
Prepare Me Well
Rain On Troy

Mastered at Sing Sing by Tony “Jack The Bear” Mantz.

Randy Harward – Harp Magazine (USA)
Australian singer-songwriter-guitarist Jeff Lang should have a higher profile in the States. Over the course of 15 import-only releases he’s refined the art of warm, visceral, cinematic folk blues. Why has it taken 12 years to get a proper U.S. introductionâ€”and via a 15 song compendium? Well, no use bitching, it’s here now. The tracks range from story-songs to instrumentals that sound like stories, and suggest two roots music luminaries: Sonny Landreth and Kelly Joe Phelps. Lang’s vocals are a dead ringer for Landreth’s high-mellow croon, and he can get the same sweetly tense slide vibrato out of his guitar. His ethereal finger picking and sometimes theremin-esque slide work smack of Phelps’ best stuff, as do the poetic lyrics.

Lang’s trick is that he blends all that into the same song, the same passages and the effect is brilliant. Should you venture to acquire that elusive back catalog, you’ll have been well prepared by this collection. (First printed in Oct 2006)

If there’s one musician in this country who needs no introduction, it’s Jeff Lang. Over a career spanning almost 20 years, with 13 solo records under his belt as well as a swag of collaborations and compilations, the man can do no wrong; mangling the guitar to his every whim, creating tempests on which to blow you away or lulling you to sleep on velvet strings, the man is a master, a virtuoso and one of our best songwriters to boot.

As it stands now, we have Prepare Me Well, an anthology of Lang’s work from 1994 to 2006; 18 tracks, from Lang favourites to previously unreleased material, radio edits and a few live numbers, it’s a complete collection of Lang at his absolute best, which is pretty much as good as it gets. This record is dedicated to the late Chris Whitely, who Lang collaborated with last year on Dislocation Blues, and as such runs deep with the lyrical and musical emotion and passion, both artists are known for.

‘The Road Is Not Your Only Friend’ kicks off proceedings, and from there it’s a veritable goldmine of classic brilliance; ‘London’, ‘I Still See You’ (previously unreleased version), ‘Bateman’s Bay’, ‘Ravenswood’, ‘Mr God’ and ‘Prepare Me Well’, I could go on and on, and I will.

The two live tracks are a winner, as you’ll attest if you’ve ever seen the man up on a stage. ’12 Thousand Miles’, recorded at the Corner last year and performed on the Dislocation Blues record, with Grant Cummerford on Bass and Ash Davies on drums, is powerful and tight, and ‘Elvis Is Still Dead’, recorded at the Basement in 2003, well goddamn if this isn’t the absolute king of the hill; backed by Angus Diggs on the tubs, Lang ventures off onto tangents only he can navigate, but for us, it’s one hell of a ride.

‘Prepare Me Well’ also contains a DVD with a few video clips, an interview and some old archival footage of Lang doing what he does best; bust it out live. Basically, there’s nothing much to be said other than if you love Jeff Lang, this is just a magic collection of his work. And if you’ve never heard of him, well, sameâ€¦get into it.

Jeff Lang is an Australian guitarist often compared to another better known player. Be it Richard Thompson, Jimi Hendrix, or Ry Cooder … someone has compared him to each of them … and even a cursory listen will tell you he’s not like any of them, except he knows his way around a fretboard. He has a high-pitched and true voice. And he plays the bejeebers out of his guitar.

Prepare Me Well is a collection of songs from Lang’s Aussie records, so one might expect a lack of unity. But Lang’s mastery of his instrument, his strong voice and his songwriting take care of that. This is some potent stuff. Slide guitars, bottleneck, dobros, Nationals, he uses them all. The album is dedicated to the late and much lamented American slide player, Chris Whitley; another one who followed his own muse. You won’t find too many standard 12 bar blues tunes on here, but there is a virtual guitar workshop included in the 15 tracks.

Lang gets a sound similar to that of Jerry Douglas, with some echoes of Bob Brozman. His songs are literate and well structured…I think this is why they compare him to Richard Thompson! Talk about doom & gloom;

“my demons can feed you
every line in the book
good God I can’t bleed you
out of my eyes
you walk by my side
you sit in my pocket
with each hit I took.”

Whew! Prepare Me Well is the name of one of his songs, but this collection from Telarc will prepare the American audience well for an onslaught from down under!

This introduction to Jeff Lang is a perfect starting point for those of you unfamiliar with the Australian singer/guitarists music.

With the exception of some rarities, the CD draws upon earlier releases, Whatever Makes You Happy, Everything Is Still, You Have To Dig Deep To Bury Daddy, Cedar Grove and Ravenswood. Watch out though, because once hooked on this incredibly absorbing and mesmerising sound you will want the entire back catalogue. Lang’s music is broadly categorised as Australian roots but is overlayered by so many influences, Skip James, Dylan, Whitley, and Waits. Above all, Jeff Lang’s individuality, integrity and creative talent dominate, reflected in the most beautifully crafted and poignant lyrics:

The moods and styles constantly change, from the Eastern rhythms of “The Save”, through the haunting echoes of “Mr God” to the frenetic beat underpinning “Too Easy To Kill”.

A word of warning to blues purists in that you won’t find too many standard 12 bar blues tunes but what you get is an entire guitar workshop as Lang plays slide and bottleneck, acoustic and electric, using dobros and Nationals.

This CD is a tribute to the late Chris Whitley of whom Lang had this to say: “Chris Whitley’s music had everything that an artist should aspire to: transcendence, raw honest beauty, bravery, passion. I can safely say that he will always be a huge source of inspiration for all of us out here in the trenches of the music world. His art is for all time”.

These comments are prophetic because Jeff Lang is heading for a similar legacy. By the time you read this, a collaboration between Jeff and the late Chris Whitley in the form of a new album called “Dislocation Blues” will have been released by ABC in Australia, so start building your collection now.

Subtitled “An introduction to Jeff Lang,” Prepare Me Well compiles tracks from five of the Australian roots guitarist’s discs released over a ten year time span starting in 1994, many of which have not been available in the States. It is meant as a way of bringing Lang’s name into visibility, and as such is a useful collection. But, since the press notes explain that Lang produced ten live and studio albums during this period, one wonders what happened to material from the other five. Additionally, selections from Native Creek Dog, which was named Best Australian Blues Album in 1996, are strangely M.I.A. Regardless, what is here is impressive.

Lang takes aspects of Richard Thompson, Ry Cooder, Leo Kottke, and especially the underappreciated Tony Furtado, and blends them together in a bluesy, swampy concoction that has been described as “disturbed folk.” It’s an intriguing sound, and along with Lang’s fragile, gentle voice (somewhat similar to Paul Simon’s), the music is consistently stimulating, even in its quietest moments.

Perhaps not surprisingly, the collection is a little schizophrenic, shifting between soft, gentle ethereal music such as the closing “Rain on Troy,” the complex finger picking and dark stylings of “Ravenswood,” and extended, moody pieces such as the title track to Cedar Grove, the album’s most riveting track. The collection is dedicated to the late Chris Whitley, and there are overtones of his edgy style here.

Lang never rushes his songs, and even though his instrumental proficiency is obvious, he doesn’t overextend solos. A few more upbeat tunes on the order of the surging “Too Easy to Kill” would make this more driving and provide a change from the rather downbeat approach, but there is no doubt that Lang has tapped into a unique style, often influenced by East Indian tunings as on “London”. He’s already been featured on A Prairie Home Companion, which provides a perfect outlet for his offbeat, occasionally bleak folk. He’s a talent who deserves wider recognition.

Lap slide wizard Jeff Lang recorded the songs on this collection of progressive and beautifully broken folk-blues during the last ten years, releasing them in his native Australia.

But these are just clues – Lang’s music is as fiercely original as it is moving.