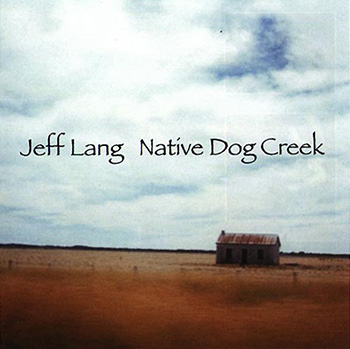 Songs written by Jeff Lang except;

Track 2 by Lang/Wordley and
Track 11 by Chris Finnen

This is Jeff Lang’s most accomplished, polished and accessible recording yet. Rather than trying to capture the excitement of one of Jeff’s solo gigs, the guitarist and producer Kerryn Tolhurst have concentrated on show-casing each song, presenting it in the best possible way.

This often means adding Dirk Dubois on bass, sometimes Adam Dicker on drums, frequently Chris Finnen on percussion, and her and there Tolhurst himself on tiple, electric guitar or lap steel.

Lang swaps around between acoustic, electric and dobro guitars. Moods and textures vary from the wistful solo ‘Never Loved the Man’, the Celtic feel of “Burn That Bridge” to the gnawing bluesy side on “Heaven in a Cup”.

I can’t categorize the singing or the songs. You’ll have to sample this for yourself. Fine songs, well recorded, from a rising star of Australian music who has found his own voice in the cluttered world of contemporary sounds.

I’d never heard of Jeff Lang so its been a pleasant find and a pleasure to review … Lang’s vocals are strong and distinctive and a good balance to his faultless lead breaks. As technically proficient as Lang is, I think he is equally proficient as a songwriter. I admire the depth of his writings … I refused to return this CD and am coughing up the bread. I’ll tell you what, if there are other Jeff Langs floating around this country please let me know.

Jeff Lang has built up a reputation for being a guitar whiz, particularly of the acoustic and slide variety. Well, “Native Dog Creek’ is the recording that will consolidate Jeff’s reputation. However this recording does not stop there, and goes a long way to cementing Jeff’s prowess as a song-writer.

Here is a fantastic release that serves to announce an exceptional talent and also to illustrate the maturity of Australian music … Lang burns bright with this collection of personal songs that will find an audience with lovers of folk-rock singer-songwriters and country-blues. The lyrics swing from the poetry of the title track and “In a Town Like This” to the dark side on “Killer”, and the sound of the country on “Wind Changing” to the sophistication of “Heaven in a Cup”.

Lang also proves as capable with his playing – on acoustic and electric guitars with effects, and on dobro – as he does with his words. The production by Kerryn Tolhurst is restrained, serving to highlight the strengths of a fine album.