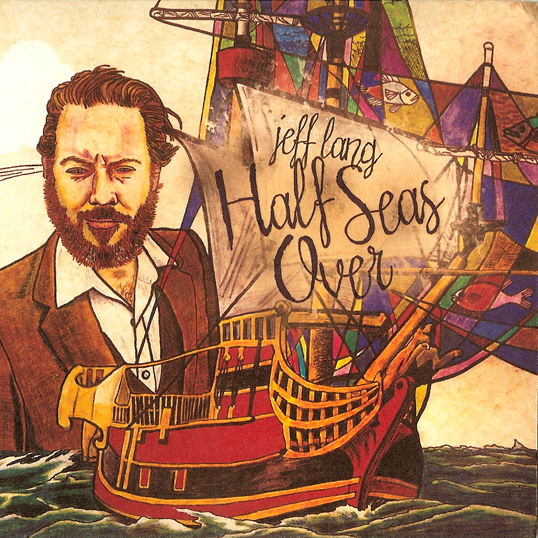 Mastered at Deluxe Mastering by Tony “Jack The Bear” Mantz

Lang’s latest album is a curious mix of blues, folk and soft rock. His guitar work, underpinned by Grant Cummerford’s bass, is at times powerful and hypnotic. There is the lilting traditional folk of the opener Southern Highland Daughter and the country blues of Copper Mine. Lang tells some wonderful stories in his songs including the rollicking Newman Town and the tough electric blues of Ghosting on My Mind. He even tackles a traditional folk song – The House Carpenter, which was a staple of early Bob Dylan live sets. This is quietly intense music with a strong lyrical content. But there are times when you wish he would just let it rip.

Half Seas Over is Jeff Lang’s 13th album. That’s a remarkable achievement for any musician, but add to that another nine collaborative recordings and the word prolific comes to mind. On Half Seas Over, his remarkable and beautiful guitar playing is showcased in an understated fashion. His songwriting skills and sweet vocal are allowed to shine through the almost lo-fi folk feel of the album. The Savannah Way is a highlight, Lang’s bending of the strings and high vocal register lend it a kind of haunting purity, while The House Carpenter’s traditional narrative is matched lovingly by Lang’s playing and singing.

It’s a year or so since this Melbourne based singer-songwriter, one of Australia’s most distinctive guitar stylists, released separate compilations, for local and overseas fans, and three years since he and the late Chris Whitley recorded their celebrated collaboration, Dislocation Blues.

Half Seas Over is the 15th record from this fine musician, whose light voice offsets the darkness in some songs. Backed by bassist Grant Cummerford and Alison Ferrier, Lang plays dobro in several tunings, including “EABEBE .. clamped a G minor” on songs he has co-written with Suzannah Espie or Ferrier, or arrangements of traditional songs.

The propulsive rhythm of Copper Mine, was inspired by the late great Mali musician, Ali Farka Toure. The Vaults of Lattanzio is an instrumental for a music-enthusiast friend. Key track, The House Carpenter, a traditional song covered by artists including Bob Dylan and the subject of a book by Clinton Heylin.

Heavily influenced by the legendary blues guitarists of the past such as Blind Willie Johnson, Jimi Hendrix and Ry Cooder, Jeff Lang is one of Australia’s perennial guitarist/songwriters. One of the few virtuoso guitarists that concentrates equally on the quality of the song itself not just the difficulty of its guitar parts, Lang has been deeply inspired by the great Bob Dylan and it shows.

An experimental guitarist that blends folk, blues, country and rock with his own rootsy style, Lang’s music is both soulful and inspiring. His latest effort, Half Seas Over is musical storytelling that touches on the ghosts of Australia’s past. Through highly technical guitar playing and descriptive lyrics, Lang brings to life Australia’s seafaring past, sleepy coastal towns and beautiful landscapes.

A classic sounding album done in the hi-tech era of the new millennium is no small feat and Lang pulls it off with ease.

For almost 20 years, Jeff Lang has been involved in a revolution. It’s been a one-man revolution “for the most part, and it’s a musical revolution to boot. Jeff Lang, then man who can’t, nay, won’t be pigeonholed, a man who has redesigned roots music, and who over the course of 13 records, has become the master of what he does.

Here then, is lang’s latest offering, HalfSeas Over, and it must be said straight up, that this is some of his best work. Ever. Half Seas Over is a record of deep, dark folk – haunting guitar lines which swoop like a hawk onto a helpless fieldmouse but then nestle like a sleeping baby – it’s sometimes a nest of vipers; lithe, dangerous and slow moving hut ever so graceful. It’s a teetering monolith; massive in stature and serene like nothing else, but the tiniest breath of wind could send it over the edge, crashing down and raining its surrounds in molten licks, shaking the earth, destroying all but regenerating it in lush, full melodies.

Half Seas Over sees Lang once again teaming up with long-time cohort, Grant ‘Squire’ Cummerford on acoustic and upright bass, in the ‘less is more’ approach he’s incorporated so well over the years – a lot of the time, its what isn’t being played that makes you appreciate how far reaching these tunes are, highlighting to a tee Lang’s tight hold of his songwriting and playing abilities, and also Cummerford’s ability to read them. With the exception of traditional tunes, The House Carpenter and My Mother Always Talked To Me, as well as a co-write with fellow Melbourne muso, Suzannah Espie (The Savannah Way), this is an album of Lang originals. From the mysterious, acoustic guitar of opener, Southern Highland Daughters, Half Seas Over wanders the full gamut of the man’s capabilities, (both instrumentally and vocally -his voice has never sounded so pure) the highlight being the dirtily groovy, Night Draws In.

With his 2005 studio record You Have To Dig Deep To Bury Daddy, Jeff Lang proved that as a songwriter, singer and guitarist he was still getting better and better. Half Seas Over – the latest addition to his quickly sprawling catalogue – has been awaited with great anticipation by all self-respecting Australian blues fans and, 18 years into his career, it could be that Jeff Lang has released his finest record yet.

Produced and mixed by Lang over the space of just a couple of days, with extra instrumentation only from bassist Grant Cummerford, Half Seas Over is very much a stripped-back and often quite sedate affair. Sonically it sounds so warm that at times you almost feel as if Lang himself is sitting in the room with you, though at other times Lang’s simplistic production techniques bring a new element to the material, particularly on the rusty sounding ‘Copper Mine’ and album closer ‘Newman Town’, which makes great use of rousing gang vocals and percussive pots and pans.

Lang’s guitar work is as good as ever – which basically means it is no short of completely freakish – but in his typical fashion the playing never takes anything away from the stories he tells through his lyrics. While vocally he doesn’t have the kind of growl that the best in the business possess, the clarity he has is vital to get the most out of his lyrics, which are just about the best he’s put to record. ‘Five Letters’ is a beautifully tragic Australian tale, while the aforementioned ‘Newman Town’ is a very simple but effective tale of a barroom brawl.

If there is any justice this record will go down as one of the best of the year, and should be a beacon for all future Australian troubadours.

Jeff Lang is a musical magpie who draws nourishment from a variety of roots sources, including exemplary influences such as country-blues legends Skip James and Blind Willie Johnson, slide supremo Ry Cooder, Jimi Hendrix, Bob Dylan and Richard Thompson. Half Seas Over, the latest distillation of Lang’s alchemy, re-emphasises the artist’s commitment to his craft and his relentless pursuit of excellence, providing ample confirmation of his preeminence in local roots music circles as a singer-songwriter-guitarist and interpreter. Evidence of the latter is manifest in a potent reading of that well-thumbed standard The House Carpenter, one that carries the Victorian’S trademark intensity while nodding to previous versions by Dylan, Clarence Ashley and Sweeney’s Men.

The opening Southern Highlands Daughter, a song worthy of Bert Jansch (finger-picking dexterity, et al), and the equally sublime Five Letters demonstrate Lang’s burgeoning talent to write songs that honour the folk tradition while containing contemporary resonances. Other originals, such as Copper Mine and The Savannah Way – the latter co-penned by Suzannah Espie – lean more on the blues.

Lang’s unerring ability to set up evocative narrative is perfectly illustrated by the opening lines of Mooneoin: “Up with the dawn all the morning birds sing, She’s face down on the dresser, on her left hand a ring.” Featuring a variety of tunings, picking, strumming and sliding, and different kinds of guitars, HalfSeas Over is vintage Lang. A virtuosic guitar player who eschews ostentation, a falsetto singer free of self indulgence, he’s an artist who places primary emphasis on the song, which is why he’s such a dynamic and compelling performer, irrespective of whether he’s playing live or in a recording studio.

Just when you thought Jeff Lang couldn’t get any better, along comes the masterpiece that is Half Seas Over. All elements combine to show why the Good Lord gave us music. This exceptional volume was prepared with more passion, skill and attention to detail than any “Idol” market could dream of.

Always the strident and assured guitarist, there’s a new strength and conviction to be heard in his vocals. Continuing in the vein of recent albums, Lang’s folklore represents the lovelorn, the lonely and the sinful. He loves a good yarn and ably matches borrowed traditional songs (“The House Carpenter”, “My Mother Always Talked to Me”) with his own portraits of hard-bitten lives. While cloaked in the gothic atmosphere of ancient cautionary tales, Lang’s characters mostly inhabit a contemporary landscape: The trucks are like ants on the face of the mine (“Copper Mine”). The electric “Ghosting on My Mind” is a plaintive ode to a comrade at rest.

The album opens with simple eloquence set to an arresting rhythm:

I never read a poem truer
than what I felt there in your arms.

So turn your head from my room where
I am spending my last hour lying
On the crow-black wings of Morphine shall I
Be out of this world a-flying.

Most tracks feature Lang solo or in duet with Grant Cummerford, however the sound is fulsome with Lang equally captivating on lap slide, Dobro, Chumbush, bottleneck, electric or acoustic guitars. He adds harmonium, clarinet and something called a Glissentar and produced the record himself. The artwork (Bulos McGurry), design (Myf Walker) and liner notes deserve vinyl LP dimensions. Cummerford’s intrinsic work, on upright and fretless acoustic bass, is perfectly understated, but like the raising agent in a fine soufflé, you’d certainly notice its absence; employ the best speakers or headphones available. From the rollicking “Newman Town” with its town chorus to the gossamer strains of “Is All” (traces of an early Loudon Wainwright III), it’s a seductive journey. I heard “No Country for Old Men” described simply as “a Cohen Brother’s film”. Half Seas Over is a Jeff Lang record … is all …