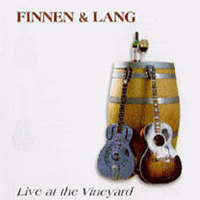 Finnen & Lang Live At The Vineyard

Helped out by a rhythm section on only the last three tracks, guitarists Chris Finnen and Jeff Lang recorded this CD live one weekend in April 1996 at the Barossa Valley vineyard of the Burge family.

Packaging and design are superb, and the music does not disappoint. These two fine musicians support each other and at the same time push one another to new heights of artistry.

Jeff Lang goes solo on Richard Thompson’s From “Galway to Graceland” and Chris Finnen plays his own optimistic “Trouble No More” alone on dobro. A bluesy adaptation of the wartime “Comin in on a Wing and a Prayer” has Chris on vocals and 6-string while Jeff slides on Dobro.

Finnen switches to electric guitar behind Lang’s dobro for “Ravenswood”, then picks up African drums while Jeff stays on dobro for his celebrated acoustic version of Jimi’s “Are You Experienced?”.

Chris stays on percussion while Jeff uses slide on his 12-string for a marathon workout on Rag Bag, a country flavoured song about a tramp.

Jeff straps on his nasty Silverstone electric for Scream, adding the rhythm section to kick the session up a notch.

Chris Finnen answers with a version of Dollar Brand’s African Market Place. Everyone, including Kerryn Tolhurst on lap steel, joins in and trades solos on a raucous and rocking Hound Dog Taylor style Gonna Send You Back to Georgia. A very rowdy end to an album that started in a delicate acoustic mode.

“Great playing, terrific variety, and the bonus of that intangible live feel make this an album to seek out if you like (mainly) acoustic music, particularly slide guitar, and can cope with some genre-hopping.

Largely the inspiration of winemaker/music enthusiast Rick Burge, the live recording of these two exceptional showmen guitarists at the Burge Family Winery provides a warm and poignant portrait of each artist’s boundless talents.

It’s quite a show; both guitarists daring to fly at dizzy heights without a safety net, pushing their arsenal of acoustic and electric instruments beyond expected limits. It also embraces a crazy diversity in styles, influences and idea, from Finnen’s traditional-styled Trouble No More, Lang’s dobro and djembe drum interpretation of Jimi Hendrix’s Are You Experienced? to Finnen’s celebration of Abdullah Ibrahim’s African Marketplace, before climaxing with an all-in electric band rave-up on Hound Dog Taylor’s “Gonna Send You Back to Georgia”.

Yet the true highlights are when they play guitar in unison, sharing a telepathic understanding of where they should steer the music through complex, improvised passages – never better than on the beautiful melody of Finnen’s “Winged Messenger”.