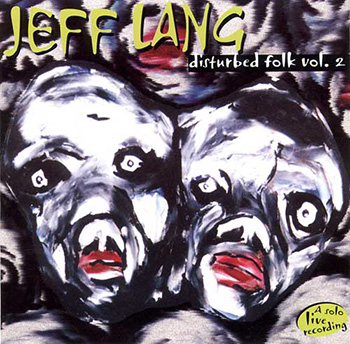 Songs written by Jeff Lang, except:

Those who had the pleasure of seeing Jeff Lang in concert in Cairns late last year would not dispute the suggestion that he is now one of the country’s most dynamic solo performers.

Seeing Lang live makes you feel totally alive. Jeff takes no prisoners; he captures his audience with pure magic and adrenalin, his dextrous, inventive guitar playing, full of dazzling runs and brutal chords and superlative songwriting skills, coupled with seemingly limitless energy and the capacity to give 110% to a congenial audience.

In the lap steel, bottleneck guitar playing field, only Dave Hole comes within cooee, and Lang is much more disposed to experimentation outside of the blues comfort zone. The term “Disturbed Folk” covers Lang’s work admirably, and the album is an accurate indication of what you could expect to hear at one of his gigs.

Five of the tracks were recorded at Sydney’s premier music club, The Basement, three at the Metro and one each at Melbourne’s Continental Cafe and Freemantle’s Mojo.

Interspersed with his own sometimes poignant, sometimes punitive works are a handful of show-stopping covers. Using every trick in the guitar book and many more of his own invention, Lang pulls out all the stops – then more, as he extracts the last ounce of juice from Tom Waits’ “Goin’ Out West”, his hero Richard Thompson’s “1952 Vincent Black Lightning”, and his own gems, most notably “London”, “Elvis Is Still Dead”, “Cedar Grove” and “Prepare One Well” (the last-named prefaced by a lovely Celtic tune “Banish Misfortune”, if I’m not mistaken).

On some songs, the sound is so full, speckled with so much colour that it’s hard to believe that he’s playing solo. A master at building up a solo, Jeff Lang is not scared to take a song right down to a whisper either. It is this fearless approach, coupled with considerable subtlety, that helps make him such a compelling performer.