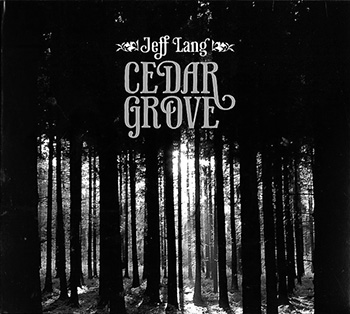 The live tracks were recorded in 1998 at the Royal Derby Hotel in Fitzroy, Victoria and feature Jeff accompanied by Grant Cummerford (bass) and Ashley Davies (drums), the live tracks are previously unreleased.

With the release this month of “Cedar Grove” Jeff Lang takes his place as a fully-matured singer-songwriter, not just a flash guitarist who sings. Awkward labels like ‘Celtic Blues’ or ‘Disturbed Folk’ drop away and reveal Jeff as an artist to be appreciated and admired on his own terms.

Playing amplified acoustic guitar with an assured touch that ranges from delicate finger-picking to the howling feedback intro of “Too Easy to Kill”, Jeff adds colour on dobro, slide guitar, 12 string, electric and lap steel over the solid bass of Grant ‘Squire’ Cummerford (Third Degree) and the remarkably intuitive drumming of Ashley Davies (Mighty Servant, Matt Walker). Some songs, like the anti-gun “Too Easy to Kill’ tell a straightforward tale. Others, like the road song with reminiscences “Always Moving” paint a mood with evocative word sketches.

Others, like the enigmatic “Batemans’ Bay” seem to be saying something- it’s just difficult to get a handle on what it is. Most of the pieces can be enjoyed on several levels- as bravado instrumental works, fine examples of ensemble playing, as mood pieces, and as intriguing poetry set to music-surely the mark of well crafted songs. Jeff’s voice has never sounded better, the slightly strident tone of earlier recordings giving way to a more rounded but still urgent sound. And having the luxury of a rhythm section allows the usually-solo guitarist to develop his melody ideas more fully, leading to a fluid but still insistently propulsive groove.

This album is a clearly stamped footprint marking the latest step forward in Jeff Lang’s ongoing pursuit of himself and his musical ideal. Jeff Lang is a performer in his prime. Experienced enough to have mastery over his instruments and his material, confident in his performance, yet young enough to still have fire in his belly, with a determination to make each show, each recording better than the last. Jeff Lang is an artist whose time has come.

How dare the local record industry claim it supports and nurtures local talent. Here, once again is a world-class musician who, instead of having local record companies fighting over him, has lingered for far too long in no-man’s s land.

Jeff Lang is another of those quixotic Aussies (think also of Phil Manning and Dave Hole who look towards American roots traditions (particularly blues and country) to find inspiration and blend local issues and attitudes with some of the most passionate “folk” music ever invented.

So what does Lang sound like? Basically he’s a cross between Chris Whitley (Too Easy To Kill and Always Moving have Whitley’s glorious note-bending elliptical guitar style), Free (Prepare Me Well has a vocal which sounds remarkably like a Paul Rodgers vocal, Robert Johnson and Bob Dylan.

There are truly magical moments on this album. Lang’s Bateman’s Bay, performed with great delicacy on a 12-string guitar and sung with a husky real-ism, is a mini-masterpiece A beautiful evocation of Australia far more deeply felt than, say, John Williamson’s simplistic ballads. Equally, the range of Lang’s playing is extraordinary. On Is She Slipping he moves from a fairly conventional 12-bar blues acoustic sound to some remarkable electric playing, which, if the sleeve is correct, he achieves by simply amplifying the same acoustic guitar. Listen to Too Easy to A Kill and gasp at the originality and fire of this remarkable performer.

This is one of those rare recordings where there isn’t a single dud track. Everything gleams with the polish of passion and the verve of virtuosity.

In the beginning, God created the slide guitar. And this was good, but God needed someone to play the damn thing and so he created Charlie Patton, Son House, and Robert Johnson. When Robert Johnson went to see the devil, he kept a close eye on him.

That was a good start, but then came along Tampa Red, Elmore James, and JB Hutto. The language began to grow and change. Out of the White Diaspora came the prophets Duane Allman, Johnny Winter, and Lowell George. They came not to replace the law, but to fulfill it. These three established the New Covenant. That was the Covenant of Virtuosity.

A new family of players is carrying on the blues language. Chris Whitley, John Campbell, Eric Sardinas, Sonny Landreth, and Jeff Lang have stepped in and kept it true.

Jeff Lang, an Australian who has been recording since the mid-1990’s, has emerged as a premiere slide guitarist. In an era where no guitar Gods have emerged, Lang finds himself the king of the six-string from Down Under. Recently he contributed to the very fine Exile: Blues on Main Street, a tribute to the Rolling Stones Exile on Main Street, on “Sweet Virginia.” In that six minutes, Lang presented more slide guitar concepts than could possibly be perceived by even the most astute listener.

Cedar Grove, Lang’s 1998 release, boasts of the blues but offers much more. No enigma, Lang boldly lays all of his creative cards on the table and ably plays in whatever guitar style he damn well pleases. The opener, “Prepare Me Well,” and “Is She Slipping” find Lang extending the language of Michael Hedges and William Ackerman (and Stephen Stills, for that matter think “Black Queen”) with a percussive, highly rhythmic presentation.