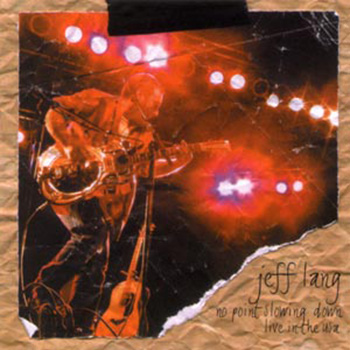 No Point Slowing Down

The eagerly awaited follow up to Everything Is Still, Jeff Lang’s outstanding last studio album, is in the pipeline and will be released in 2004. In the interim, the artist’s growing body of admirers should relish this appetiser, recorded live in the USA at gigs in New York, New Hampshire and Pennsylvania. Jeff is currently at the tail-end of a six month stint in the States which has seen him consolidate his reputation there, playing to packed houses from Alaska in the far north to Florida in the deep south. It occasions no surprise to hear that the Yanks are lapping him up. Lang’s songs are saturated in American roots music, though lyrically they resonate of Australia. His virtuosity on slide guitar would elicit great appreciation among Ry Cooder fans, in particular.

No Point Slowing Down contains songs from Lang’s back catalogue, including long time faves like ‘Ravenswood’ and ‘Bateman’s Bay’ and a cluster from Everything Is Still. Those who own a copy of that album will find it interesting to chart the development of superb numbers like ‘Big Feeling’ and ‘Trainwreck 49’, which take on a different dynamic when delivered solo on stage. As those who have seen him will know, Lang is a veritable one man band, capable of putting out a wall of sound comparable to John Butler’s, but there’s also great artistry in his playing. Even the more boisterous numbers are wonderfully melodic and full of light and shade. While Jeff’s voice has become progressively expressive and stronger over the years, it’s still hard pressed to match the huge range of his guitar playing, which is utterly mesmerising. In the ferocious ‘Burn That Bridge’ Lang shows the strumming technique of a flamenco maestro; in ‘Bateman’s Bay’ it’s all subtelty and harmonic wizardry.

No Point Slowing Down is an excellent album, at least the equal of Jeff Lang’s previous live excursions. The sound is clear and crisp and has what the tech’s describe as ‘warmth’.